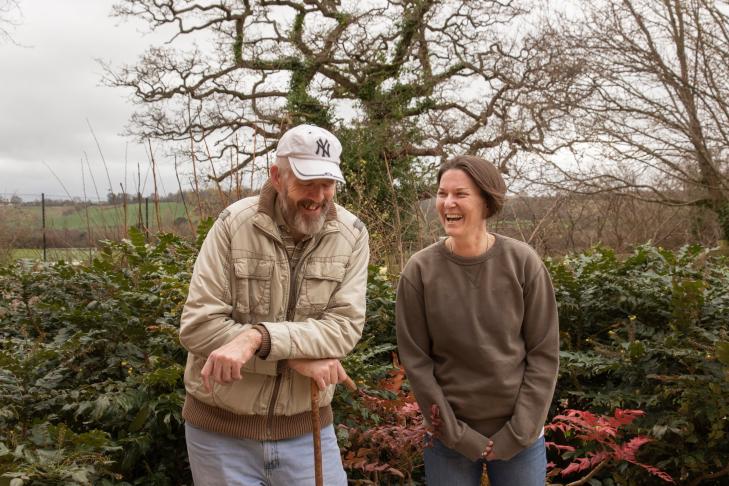 Russell first came across Cosmic two years ago when he was advised by the Yeovil Job Centre to attend our weekly drop-in sessions. At first, he was rather apprehensive, he admitted that he was shy and lacked much enthusiasm. But he soon got chatting to other learners and started to grow in confidence.

Having never really used a computer before, Cosmic spent dedicated time with Russell at each session to support him in picking up the basics.  We initially started with training on how to use Google and then moved on to job-searching sites to support his hunt for work.

Russell was told about the six-week computer course Cosmic run through our partnership with Yarlington Housing Group, and how he would receive a brand-new laptop for free if he attended the full course. He signed up immediately.

Russell began to come out of his shell. The six-week course covers all the basics of using a laptop: what each key does, how to stay safe online, Google and searching the internet, using the webcam, emailing and loads more.

Before he came along to the drop-in and enrolled in the course, Russell says he wasn’t doing much with his life. He felt stuck in a rut. The training and the support he received from Cosmic has changed his outlook on life, and his confidence has grown exponentially. He no longer feels isolated from society; and his social life has improved drastically now he has access to the online world. Becoming more Digital has made him more outgoing, and he no longer gets nervous when meeting new people - both online and in person.

“The training and support has opened my eyes completely. It gave me the kick I needed to get out and meet people. I’ve not looked back since”.

Russell thanked Cosmic for being so welcoming and supportive, and creating a relaxed environment that allowed him to learn. Since the course, he has set up his own small gardening business, and proudly popped into a drop-in session recently to show everyone his new business cards. He now volunteers with a number of charities each week, putting his passion for gardening to good use with a number of community garden schemes in Yeovil.

In addition to Cosmic, Russell has been working with Inspired to Achieve at Yarlington which has enabled him to set up his fledgling business.

“Thanks for all the help you have given in more ways than one. I can’t thank you enough for everything; everything’s been going great.”

We wish Russell the best of luck with his new business venture, and we can’t wait to see what he does next!